Hexie squirrel in my lap

Some time last year I came across an old blog that had a knitting pattern for hexagons.

I made a knitted throw for a friend and really enjoyed making the hexies. 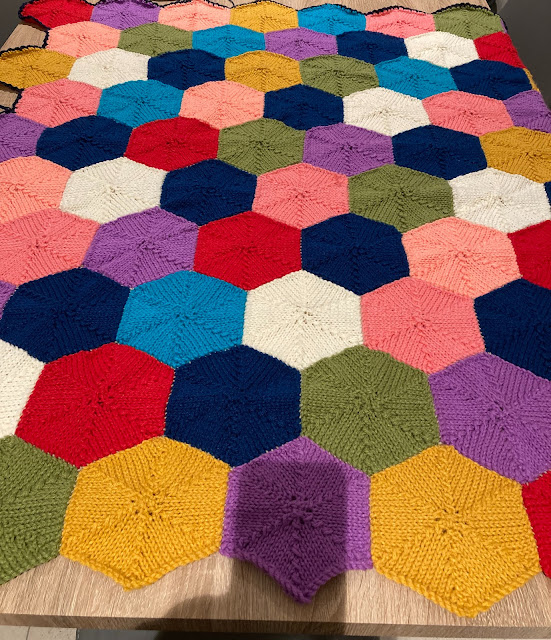 Ever since then I've had an idea swirling around in my head for how to make a throw for myself, but with hexie flowers, rather than random placing of hexies.

I've made a start ... unfortunately it's keeping me away from what I should be doing.  I'm stonewalled by the stone roses at the moment, but knitting hexies is a great way to relax at the end of a hard day at work.

I'm using rather cheap acryllic yarn from the same supplier.  But I'm finding that the white yarn which I have chosen to use as the centre of the 'flowers' is not as thick as the same yarn, same supplier, in saturated colours.  I wonder if anyone knows why this is so?  It doesn't matter too much for this project, but it's something that is making me wonder.  I will be embroidering knitted french knots in the centre of each white hexagon to represent the stamens.

Terrible pic, but you get the idea.
Anyhoo, I will post updates as the throw develops, and I'm enjoying the kind of mindless knitting that means I can watch foreign language films (almost always the best) reading the subtitles as I occasionally look up and glance at the TV screen.
Have a happy weekend everyone!

Popular posts from this blog

Butterflies are free ... and so am I 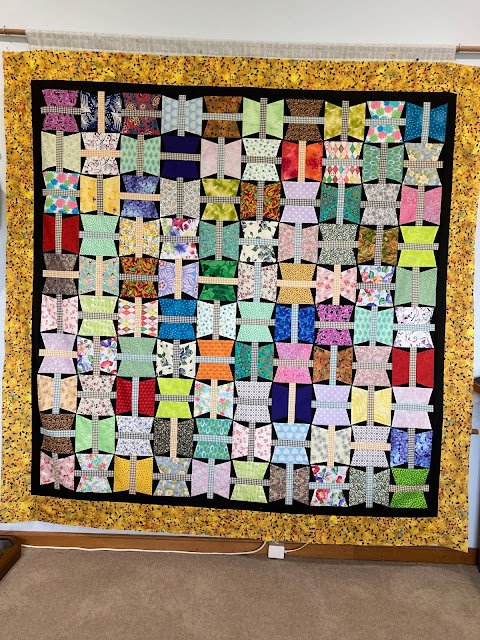 I was over half way through making the 120 framed nine patch blocks needed to make my own version of Lynne Dykstra's ( Klein Meisje Quilts ) gorgeous quilt ( see my blog here ) when I got sidetracked by this butterfly block tutorial by Mrs Schmenkman Quilts .  The blog isn't kept up-to-date any more, but please go to it to discover how the block originated.  This tutorial was written in 2010 when it seems the block was very popular. Anyhoo, I became obsessed with making my own and, using any scrap I could find, I started making what has turned out to be one of my favourite quilts. The tutorial is very clear and I had no problem putting these blocks together. I don't normally trim blocks to size, so that task was tedious, not to mention wasteful of the black background fabric, but I persevered to produce one hundred 6" blocks.  In the beginning I wasn't going to put a border on, but quickly found that the butterfly wings stretched too much to be simply left with a s
Read more

War of the roses 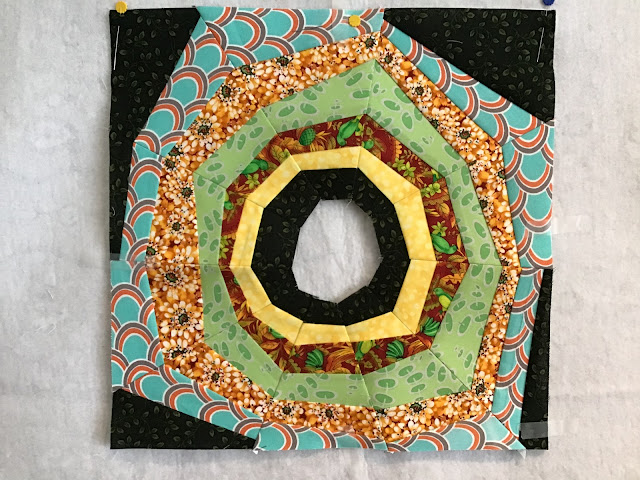 Thi is the sixth block I’ve made from the Stone Roses pattern that I bought a couple of weeks ago. It’s the only block that is actually the right size and all squared up. Here’s why: So what happened?  Well, five blocks in I became convinced that the pattern was wrong. How can you make a foundation pieced block and have each one differ in size? I checked my seams. I checked the stitch length. I tried both quilting feet on my Bernina. Although the pattern didn’t specify this, I also lightly pressed each alternate wedge so that seams nested. Nothing worked.  I became convinced that the pattern was wrong.  So I printed off a set of foundation papers and taped them together. They fitted exactly. Hmmm.  The problem had to be my piecing. Since each wedge is foundation pieced, the problem has to be with joining the wedges together - hence baggy middles and uneven sides. I had been removing the foundation paper before joining the wedges together.  The pattern isn’t clear on whether or not to
Read more 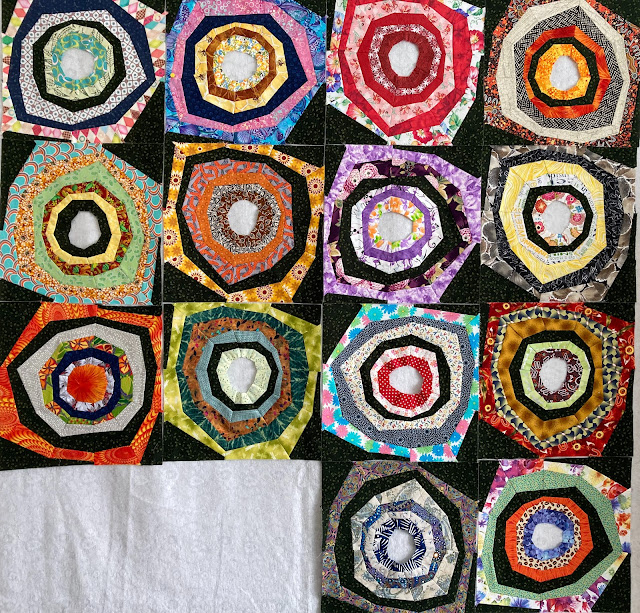 Okay ... 14 blocks in ... and there are some I just don't like.  Here they are up on the wall. I've been so determined to use up scraps, that I think I have just lost the plot with at least 4 ugly blocks.  And here I was rubbing my hands together thinking, "Only 10 more hours to piece two more 'roses' before I start appliqueing the centres!" Disgruntled, I decided I needed a break.  I'm so grateful to Audrey at  ( Quilty Folk ) for posting tutorials on how she hand quilts her beautiful work. I am thinking of hand quilting the roses quilt, but need to practice on something small first. I remembered starting a Quilt-As-You-Go project about 13 years ago.  There have been 3 house moves since I started making the blocks.  Now, where could they be? I went hunting for them.  Found them (and you guessed it) found several other forgotten fabrics in various boxes during the hunt. Some fabrics were picked out for an idea for a long-forgotten bear paw quilt that I als
Read more

Hubblebird
I work full-time and relax by sewing and knitting.